Compact Fluorescent Lightbulbs (CLF) do save a lot of energy, but, considering the health risks, are they an authentic choice for a green lifestyle?

CFLs contain mercury, which poses a significant cancer risk. If a CFL is broken, mercury is released into the atmosphere requiring special cleanup to protect the skin and, even more importantly, the lungs.  The EPA emphatically states that the amount of mercury is comparatively very small–too small to pose a risk even if released. However, it is required that CFLs be disposed of as hazardous waste. We are not allowed to just toss them in our own trash or recycle bins, yet many people don’t even pay attention to this regulation because of the sheer inconvenience. 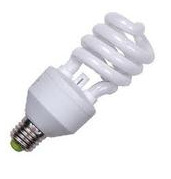 In addition, scientific studies have recently found CFLs to emit high levels of ultraviolet radiation—specifically, UVC and UVA rays. In fact, the UV rays are so strong that they can actually burn skin and skin cells. In every bulb the researchers tested, they found that the protective phosphor coating of the light bulb was cracked, allowing dangerous UV rays to escape. Experts say the radiation could initiate cell death and cause melanoma, the deadliest of skin cancers. The study revealed that the response of healthy skin cells to UV emitted from CFLs is consistent with damage from ultraviolet radiation. It was also found that incandescent light of the same intensity had no effect on healthy skin cells.

The researchers urged that consumers be careful when using compact fluorescent light bulbs, stating that their research showed it is best to avoid using them at close distances and that they are safest when placed behind an additional glass cover. The research, funded by the National Science Foundation, was a collaboration of Stony Brook University and New York State Stem Cell Science (NYSTEM).

As we teach and strongly emphasize, there is more to a green lifestyle than saving energy. An authentic green solution does not involve proven health risks to oneself and family, nor does it support the environment in one way while threatening it in another.

LED bulbs are clearly a greener option than CFLs. They are also much pricier, but have a very long life.

We have used broad spectrum bulbs for years. They mimic natural daylight, coming as close as possible without the UV rays emitted by full spectrum bulbs. They cost a few dollars each, but also have a very long life. We’ve only had to replace them once every couple of years or so.